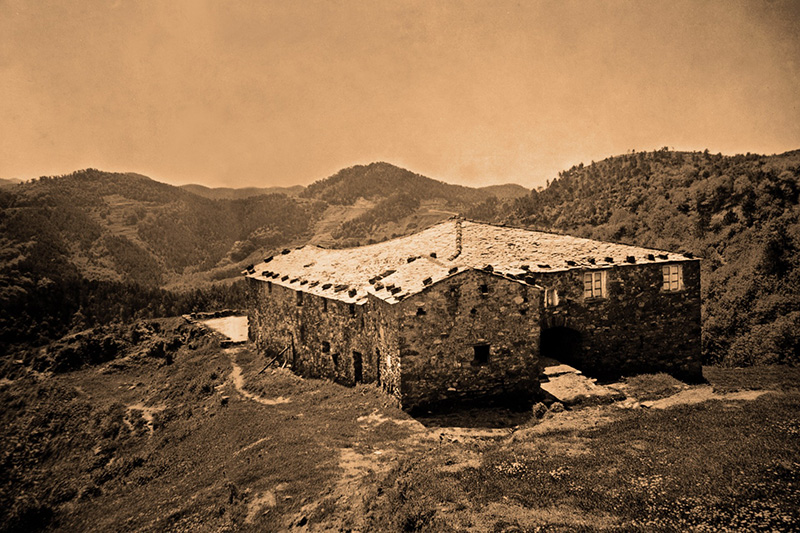 The Farm Richini alle Vagine is located on the heights that dominate Levanto and Monterosso al Mare, in the municipality of Levanto, at 680 meters altitude, solitary, in the midst of forests of chestnut and oak. They are places in which the presence of castellari reveals the frequentation of man since prehistoric times. After the Roman colonization, which valorized the port and traced the lines of communication favoring the connection with Luni, Piacenza and Parma through the Centocroci Pass, and with Genoa through the Passo del Bracco, an era of involution and division began that brought the Zolasco family to dominate the upper valley of Levanto, Bonassola Frattura, and the Da Passano to have the fiefdom of the village and the lower valley. With the convention of the thirteenth century between the men of the village and those of the Valley, the two communities. while maintaining their own identity, they adopted a single statute giving rise to a process of integration that, over time, led to a loss of importance of the mountain garrisons. Of these remains, not far from the Fattoria, the base of the Torrione del Castello degli Zolasco. In more recent times, the Fattoria, incorporated into the properties of the Richini family, Genoese nobles who in Levanto in 1700 contended with the Marquis Sauli the primacy of the highest land income (250,000 Lire Genovesi in 1759, a billionaire income in today’s day) , also served as a post station for the caravans that on the Via del Sale carried this and other goods in the interior: in Varese Ligure and from there in Piacenza and in Parma (the last sharecroppers, the Sigg.ri Medone, remember that their grandfather indicated a part of the current building as a salt warehouse). Once the ownership of the fund has passed to the Schiaffino di Levanto family, there is a period of relative prosperity, in a panorama of general poverty. Three generations of the same family lived together in the farm, up to a total of 16 people. The main productions, organized mainly for self-consumption, consisted of wheat, potatoes, dried vegetables, wineskin, cheese, chestnuts, vegetables, wine, fruit and every product of livestock breeding: sheep, pigs, cows, poultry etc. … The Levantesi, especially during the war, used to say that at the farm a plate of soup and a bread of wheat or a chestnut cake were always found, but it was equally certain that not a single penny would be found. In the post-war period, the lack of viable roads, electric, hydraulic, and telephone networks led to a rapid depopulation of the rising mountains: men go to surf or work on the railway or at the military arsenal of La Spezia, women go to service in the hotels and families of vacationers and wealthy locals.